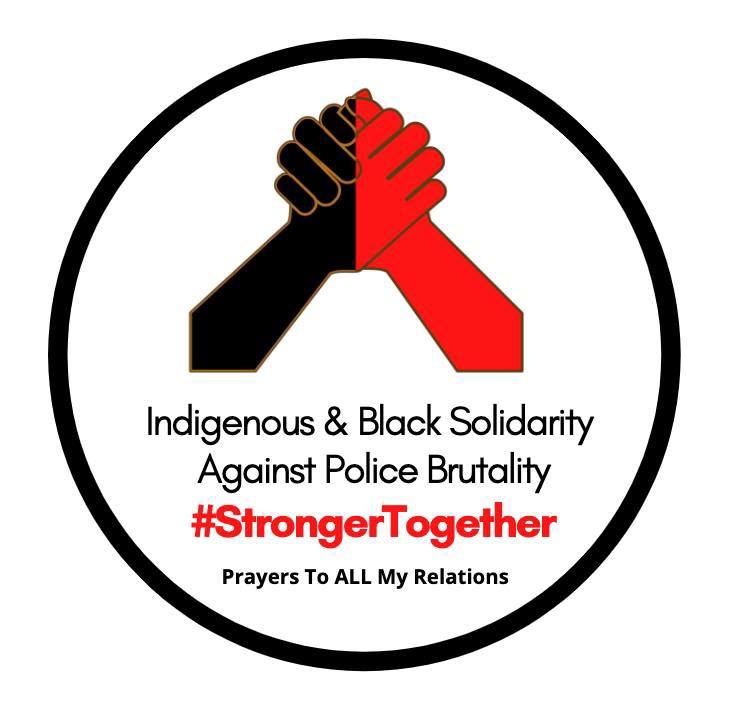 The police murder of George Floyd at the hands of the Minneapolis Police Department was an outrageous violation of human rights which must result in the prosecution of all the officers involved. The civil unrest which righteously followed was a result of the city of Minneapolis’ inadequate response to the actions of its officers as an entity charged with the protection of all of its residents. Across America, Black teenagers, college students, city councilmen, congressmen and residents of all walks of life have shared detailed accounts of the realities of police violence as a daily repeated reality. In America today, we know that being Black is sufficient for police to justify violence as they represent an unfounded threat based in racism.

We stand in solidarity with the African American community, as Peoples who have also experienced violent and structural oppression at the hands of the settler state.

Community leaders are calling for meaningful dialogue and elders are laying down prayers. Escalating police presence and ongoing racist ideologies in police departments across the country is not the solution. Therefore, we demand additional community action and organizing to create an authentic dialogue to address the root causes of police violence against black, brown, and indigenous communities.

This morning we awoke again to the reality of police violence in what is fast becoming the clear trappings of an authoritarian state which is only the latest manifestation of a long history of colonization, genocide and violence of the country against Indigenous peoples. At the border, Indigenous children are incarcerated and cast out, across LA, fathers, sons, and brothers have been beaten and shot to death and the Sheriff remains lawless.

And in Minneapolis, buildings burn.

As a result of the current unrest, a local American Indian education center in Minneapolis, called MIGIZE, Anishinabe for Eagle, was burnt down as well.

We’ve seen this all before. We’ve lived it.

Indigenous Peoples and tribal members of sovereign American Indian nations here in California also include African American family members. In Los Angeles, being Black or Brown is also often enough to be dehumanized and criminalized by local police and sheriffs. Police brutality is part of a larger issue of domination, oppression, and colonization in this country. State violence is in the DNA of the founding of this country, state, and city.

Today, we call for continental solidarity with African American communities in Minneapolis, St. Paul, and here in Los Angeles.

We express our love and kinship with our own African American relatives and call for exhaustive measures to be taken to change the culture and purpose of all police departments.

In the new normal, we cannot accept any use of public institutional violence against us. We need to reimagine the role of law enforcement in US society, one that is guided by creating and championing peace and service to all communities.

In solidarity with our relatives and partners in the Twin Cities metropolitan area of Minnesota, we call for the swift and vigorous prosecution of the four offending (and now terminated) officers complicit in this murder to the fullest extent of the law.

We stand with the African American community, and all other communities regularly targeted for violence by police and sheriff’s departments across the country.

We demand community-based recommendations be implemented without delay in Minneapolis, Los Angeles and across the country. We also demand that more strategies be developed and implemented to properly protect Black, Brown and Indigenous people from the police forces our tax dollars, cities, and towns subsidize, especially as the City of Los Angeles plans to expend additional funds on policing instead of community-building, housing, and education.

As Indigenous Peoples and their allies, we stand in solidarity with all oppressed people in what is currently called the United States, and we call for immediate systemic change with unity, justice and dignity.

We offer our kinship, prayers and commitment from Tovaangar and Tatavium territories (the Los Angeles basin and So. Channel Islands). As a coalition of Indigenous Peoples we pay our respects to the Honuukvetam (Ancestors), ‘Ahiihirom (Elders) and ‘Eyoohiinkem (our relatives/relations) past, present and emerging.

PrevPreviousLos Angeles Unified School District Responds to Formal Complaint Submitted by the Indigenous Education Now Coalition
NextThe election could have big implications for Native Americans. These three women are getting out the vote.Next