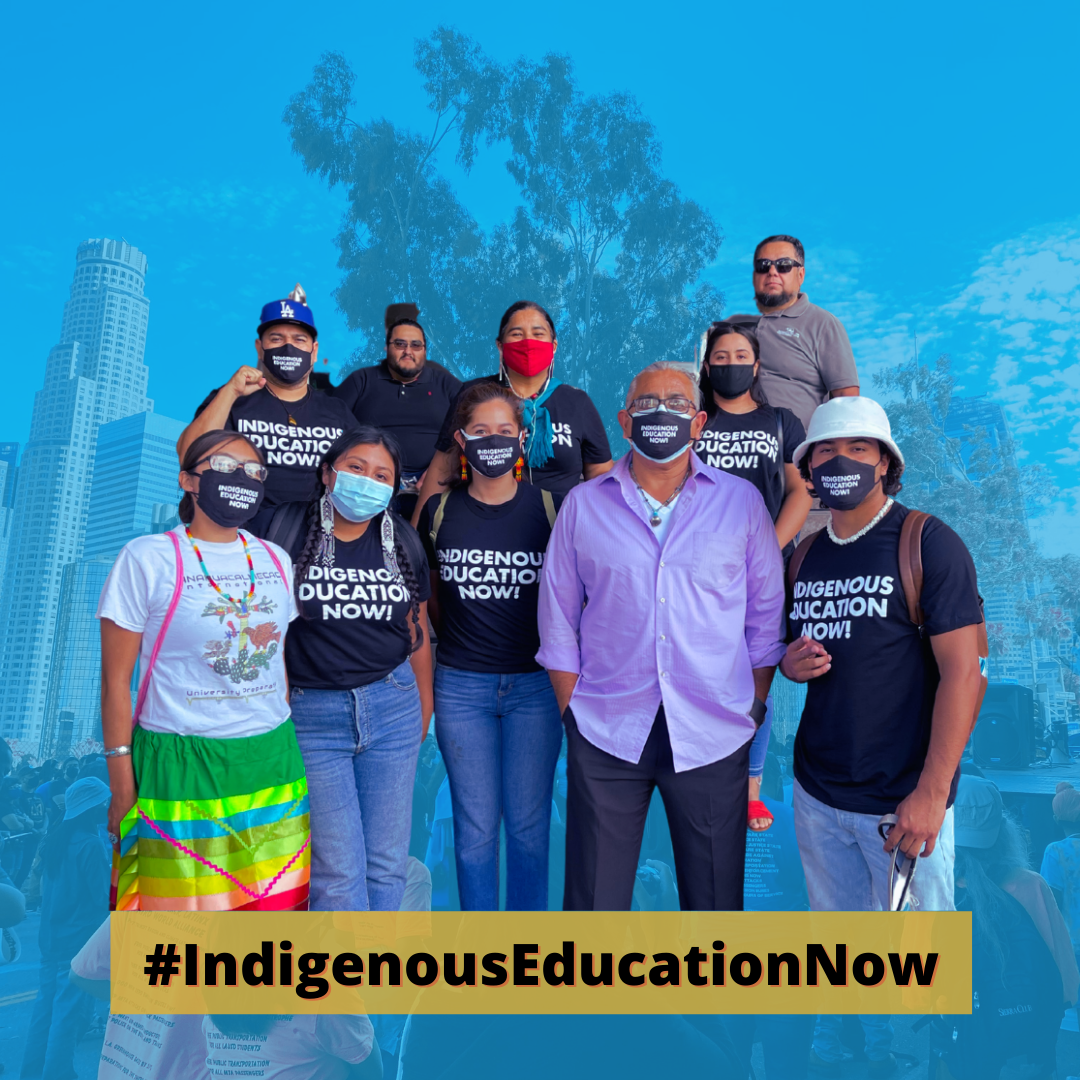 VOTES TO DEDICATE $10 MILLION TO NATIVE AND INDIGENOUS STUDENT EDUCATION

Los Angeles, Calif. (June 23, 2021) – The Indigenous Education Now Coalition (IEN), comprised of students, parents, community members, Tribes, and Native organizations, is proud to announce that the Los Angeles Unified School District (LAUSD) Board of Education unanimously voted on Tuesday, June 22, to dedicate $10 million to support Indigenous Student Achievement that will bring much needed relief for Native and Indigenous students that have experienced enormous hardships due to the pandemic.

“The pandemic has been hard. Not being able to go into public, not being able to be in community — such as gathering at powwows — has left a spot in my sense of belonging, and left me feeling isolated by not being able to see other people,” said Tash Montana (Tohono-O’odham), a LAUSD rising junior and member of the Indigenous Education Now Coalition. “It’s been hard enough being a Native student at LAUSD. The LAUSD curriculum has been especially hard, and something I have to decipher about what’s true or not. I learned about my culture and history through my family and friends, not at school at all.”

Los Angeles Unified School District has the largest American Indian/Alaska Native and Indigenous student populations than any district in the state. “Although our student population is large by our standards, Native and Indigenous students have suffered a history of disinvestment, chronic neglect and invisibility in the district,” said Chrissie Castro (Diné & Chicana), member of the Indigenous Education Now Coalition and Executive Director of the California Native Vote Project. “We also know that there are thousands of Indigenous students from Mexico and Central America that are not being counted. Last night, LAUSD took a step in the right direction to correct historical and current harms that educational systems have perpetrated against our students.”

“Our community has been working to transform LAUSD on behalf of Native students for decades,” said Rudy Ortega, Jr., Tribal President, Fernandeño Tataviam Band of Mission Indians, and member of the Indigenous Education Now Coalition. “Along this journey, we have lost elders, including Tongva elder, Julia Bogany and Cayuga/Cherokee advocate Sandy Franks. We stand on their shoulders, and all of those that have worked tirelessly for our students for many years.”

The funding from yesterday’s announcement will be allocated to Native and Indigenous partner organizations and Tribes who can help address critical student service needs related to academic achievement in the district’s larger COVID-19 recovery efforts, and ensure LAUSD schools are places that affirm their unique linguistic, cultural, and historic backgrounds.

IEN Coalition members were able to mobilize community members to leave nearly 100 voicemail messages to the district hotline, have dozens of its community members email the board with public comment, and garnered more than 1,000 petition signatures in support of Indigenous Student Achievement seed funding. Additionally, IEN Coalition members also stood in solidarity with LA Students Deserve at yesterday’s rally at the LAUSD headquarters, and IEN members were able to share public comment at the LAUSD board meetings throughout the day.

“This is a historic win, and we should celebrate. But our work doesn’t stop here,” said Castro. “We need better data and reporting; we need to invest dollars into the Indian education program which has been starved of resources for too long; we need to re-establish community oversight with a commission or Community Steering Committee; and there must be meaningful Tribal Consultation, respecting our rights as Native and Indigenous peoples, including regarding curriculum reform.”

“The power of organizing as a coalition of Tribes, organizations and communities proves to be the most effective path forward. We celebrate the Board of Education’s responsiveness but remind everyone that the allocation is still a pittance compared to the tremendous disadvantage, debt and duty to serve Indigenous students deserve,” said Marcos Aguilar, Nahua Masewalli Mexicano, Executive Director, Semillas del Pueblo-Anahuacalmecac, and member of the Indigenous Education Now Coalition.

About the Indigenous Education Now Coalition

Building off the community organizing win of the recognition of Indigenous Peoples Day, a group of Native students, parents and community members came together to participate in a community organizing training series to continue the community momentum, strengthen leadership skills, further political analysis skills, and increase the ability to lead campaigns to change the systems and policies impacting their families. Many of the Native youth and their families were connected to Native organizations or Tribes, and several months later, these relationships resulted in the formation of the Indigenous Education Now Coalition (IEN).

The coalition has come together to support the vision of the students and parents for a radically different educational system that honors the cultural strengths and teachings of Native and Indigenous families.