The Indigenous Education Now Coalition has submitted an official complaint against the Los Angeles Unified School District to the U.S. Department of Education for its failure to meet the needs of Native students. Native students and their families are disproportionately impacted by COVID-19, and the crisis is exacerbating the historic neglect of the school district when it comes to their responsibility to meet the academic, cultural and health needs of Native and Indigenous students. Read the full press release here.

The IEN coalition is asking all current and former Native and Indigenous students to share their experience from school districts across Los Angeles County. 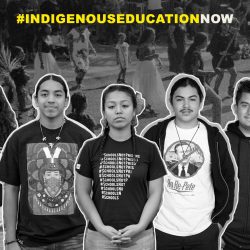 Building off the mass community mobilization of Indigenous Peoples Day, the removal of the Columbus Statue, growing indicators of disparity and inequities faced by Native American, Alaska Native, Native Hawaiian and other Indigenous students, the IEN formed more than one year ago gravely concerned about the health, well-being and future of Indigenous students and how their lives are impacted by public schools in LAUSD.